‘Tis the season to be jolly…’ or as our Balliol-educated PM would have it in Covid year, ‘jolly careful’. Here in Oxford, the colleges and the University have been making big efforts to be both. Many traditions have survived the virtual transformation and there has been a plethora of creative initiatives helping everyone celebrate enjoyably ‘at a distance’.
Colleges have put up their Christmas trees and the porters have dressed up in Christmas jumpers and paper crowns before posting themselves smiling bravely on Instagram; carols have been broadcast via Zoom from largely empty chapels; mince pies and mulled wine have been partaken of (though in smaller quantities than usual and in do-it-yourself packages) and some magnificent decorations adorn the Westgate Shopping Centre, the Covered Market, the central streets and various University buildings. The Bodleian has erected its traditional tree in the centre of Old Schools Quad and doubtless Christ Church hasn’t forgotten to put up its Alice-in-Wonderland tree decorations as always. The now traditional Christmas Market has unfortunately been absent, but the University Christmas Tree stands proudly in its usual place on Broad Street beside the Chanukiah, reminding us that there is more than one festival being celebrated in these dark times.

However, one college in particular stands out for its Christmas traditions. At Queen’s College, an ancient ritual has taken place every year until now. The Boar’s Head Dinner is possibly pagan in origin, but a survival adapted, like the Yule Log, into the Christian era. Boar’s Head dinners are celebrated elsewhere but the Queen’s dinner is singularly special, respected as a celebration of student heroism and an object-lesson in the practical importance of the Classics.

The backstory involves a Queen’s scholar who took a copy of a book by Aristotle to Shotover Park. He was clearly engrossed when surprised by a wild boar who didn’t appreciate his presence in his territory. The angry boar did what angry boars do – he charged. The quick-thinking student defended himself with the only weapon he had to hand – his book. Evidently thinking that there had been some misunderstanding and that the boar might desist if he knew it was a Greek classic and not some Latin or English rubbish, he shouted at the boar ‘Graecum est!’ – (It’s Greek!). Tragically, we’ll never know whether the boar would have been mollified by the revelation because it was too late. As every Physicist knows, deceleration takes time and conversely, the force of a charging boar hitting a stationary object (even as small as a book) creates irreparable damage, particularly when it penetrates deep into the mouth and obstructs the airways. Our poor boar was stopped in his tracks, beaten by a book, killed by culture, asphyxiated by Aristotle…

On the other hand, the victor, our learned but opportunistic student, removed the boar’s head (a whole boar is heavy and it was a long way home) and returned in triumph with tales of his averted demise and derring-do to entertain his peers.

Ever since (well, only for the last 400 years?) the college has celebrated at Christmas. The Boar’s Head dinner used to be held on Christmas Day itself until the Dons started to marry and their wives complained about them absenting themselves for a boys-only jamboree just as they were serving up the goose. Today, the dinner is an alumni event, but no less spectacular. See for the 2014 Ceremony of the parading of the boar to High Table. QED, a ritual performed in all solemnity. The boar bearers and choir are singing the Boar’s Head Carol (see anglicized lyrics at the end of this blog*).

In fact, Queen’s has always taken food and drink very seriously. The founder, Robert d’Eglesfield, clearly enjoyed both and set out a number of stipulations designed to make life as entertaining as possible. The original members of the college were called to dinner with a trumpet and the dons had to wear blood-red robes, whilst the chaplains wore white. Eglesfield presented a wonderful drinking horn, topped by an eagle and resting on three claws, which remains one of the college’s chief treasures and a ‘frog cup’ which surprises the drinker by squirting beer at him/her. You can see both in the Queen’s online exhibition of Beer and Brewing Here
So, there is lots going on in our fair city here at Christmas and it is the ideal time to visit! Book an Oxford Walking Tours tour and we will tell you about more of our fascinating and extraordinary traditions.

In the meantime, from all of us here at Walking Tours of Oxford: Have a Very Jolly Oxmas!

*
Caput apri defero
Redens laudes Domino.
(The head of the boar I bring,
Rendering praises to the Lord)
The Boar’s Head in hand bear I,
Bedecked with bays and rosemary.
And I pray you, masters, be merry,
Quot estis in convivio.
(How many are you at dinner?)
The Boar’s Head as I understand,
Is the bravest dish in all the land,
When thus bedecked with a gay garland.
Let us service cantico.
(Serve it while singing)
Our Steward hath provided this,
In honour of the King of Bliss,
Which on this day to be served is,
In Reginensi Atrio.
(In the Queen’s Hall) 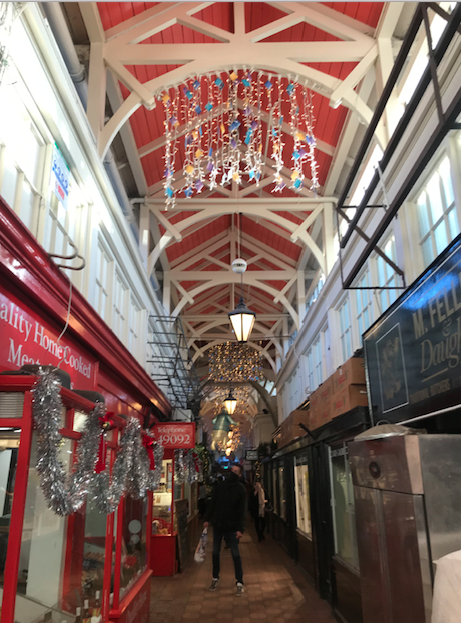 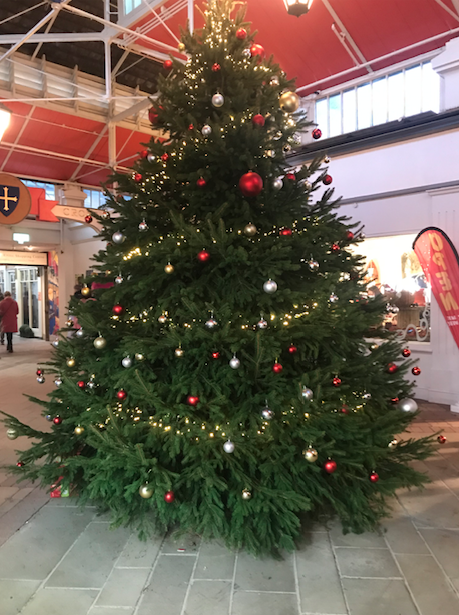