Hidden away at the back of the Oxford Museum of Natural History, the Pitt Rivers Museum is extraordinary and not to be missed. Entering it for the first time is like discovering Aladdin’s cave.

It consists of a huge ground floor room with two galleries laden with objects. Yet, despite its size, it is strangely intimate, like an eccentric uncle’s attic. This is partly because of the sheer amount of ‘stuff’ squeezed into the available space, but also because of its extraordinary variety. From the massive Canadian totem pole to the tiniest rings and charms, from rifles to masks, mummies and glass surgical instruments, everything is unexpected and surprising.

The high ceiling allows space to breathe, but there is little room to move without encountering an exhibition case. And each case is so crammed with fascinating objects that you can spend an hour just looking at its contents and deciphering the labels. These are often hand-written and have been here since the early years after the Museum was opened in 1884.

The Natural History Museum next door displays animals, insects and minerals. In contrast, the Pitt Rivers Museum is an ethnographic museum and all its artefacts were made and/or used by human beings.

In the museum they are grouped by type (e.g. textiles, weapons, baskets, dead enemies…) and their original function was to demonstrate progress. Pitt Rivers described what he saw as the journey from simple to ‘civilized’ in an essay on ‘Cultural Evolution’, something in which the Victorians implicitly believed. Of course, in the race to progress they were in pole position.

General Pitt Rivers himself was originally a Grenadier Guard who was assigned in 1850 to test a new rifle, the Minié. As a result, he developed a passionate interest in the historical development of firearms. This in turn led to a fascination with history and archaeology and to collecting the material objects you can see today.

Thanks to the attention to detail and passion of the museum’s first curator, Henry Balfour and the brilliant work of anthropologist Beatrice Blackwood, who was not only an adventurer but a meticulous cataloguer, the Pitt Rivers became the exciting yet academically robust museum it is today.

To visit the museum virtually go to: Click here We recommend a virtual tour first and then a closer look at whatever interests you. They have lots of home-schooling resources, perfect for lockdown projects.

We recommend a trip to the Pitt Rivers Museum as part of a day spent in Oxford, ideally after a Walking tour with Walking Tours of Oxford. Looking forward to welcoming you when times change.

is surely one of the most extraordinary museums in the world.

On Friday 8th May, we celebrated VE Day here in the UK and I imagine all over Europe. It marked 75 years when World War 2 finally came to an end in Europe. It was to be another 3 months before the world was at peace.

In usual times, the celebrations would have involved large gatherings and parties all across the land. Here is my hometown, there was a Tea Dance planned. Of course, due to the Coronovirus pandemic, all events had to be cancelled.

Nonetheless, the British people still found a way to mark the occassion. We decorated our houses with anything we could find in red, white and blue. Initially I did not have any bunting so my talented daughter threw together some homemade bunting from off cuts. 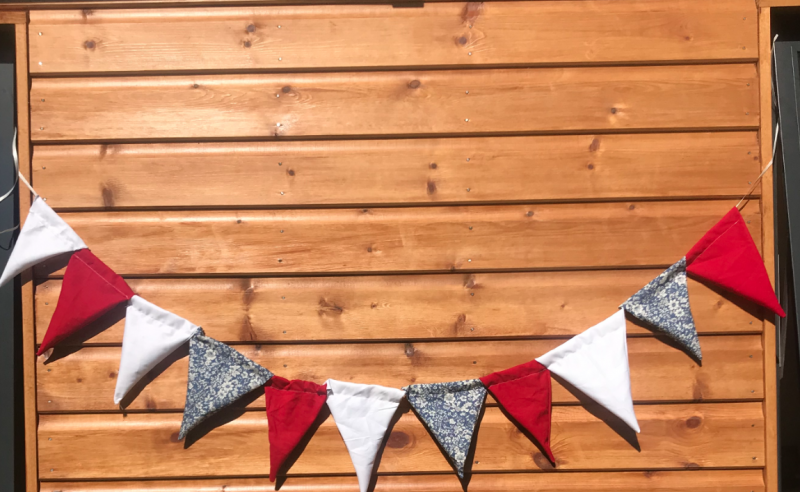 We listend, not as in days gone by, on the wireless but with the benefit of being able to see on television, the address made all those years ago by Sir Winston Churchill. The birthplace of Churchill is located just 30 mins outside of Oxford near Woodstock – Blenheim palace which is the only non-royal, non-episcopal country house in England to hold the title of palace! It makes a great day out from Oxford and more details can be found here

Located nearby you can also visit the grave of Sir Winston Churchill in the graveyard of St Martin’s Church, Blandon. For more details See here

We then listened to the Queen speech before taking to our front gardens and driveways for a traditional afternoon tea!

In my household, we hooked up with my sisters and parents via Zoom so that we could enjoy together whilst being apart.

After dinner and some family games, we watched more on television including listening to ‘We’ll Meet again’. The words more poignant than ever and I for one, cannot wait ‘to meet again’.

We hope that tours will be up and running by September and look forward to welcoming you to Oxford. Stay safe.

When Albert Einstein lectured in Oxford in 1931, little did he know that 90 years later Oxford’s visitors would still be puzzling over his calculations. Einstein’s handwriting is clear though his equations are for most people – unfathomable. Nevertheless, the ‘Einstein Blackboard’ is today the most famous exhibit in Oxford’s Museum of the History of Science. See it here: Blackboard

Einstein himself grumbled about the Blackboard’s preservation. At the time he said it smacked of personality cult and in 1933 he objected that he had since discovered that everything he had said in the lecture was untrue (!). Needless to say, in the interests of tourism, the protests of the most famous scientist in history went unheeded.

In fact, as with all our University of Oxford museums, you can spend several days visiting virtually during lockdown. We thought we should just give you some history before you get started:

Oxford’s Museum of the History of Science was not the first occupant of the rather lovely limestone building on Broad Street that you can see in the photo. Opened in 1925, it grew from a much older Museum (discussed in a previous blog), the 17th century Ashmolean Museum. But right from the start, science featured. The original Ashmolean housed a lecture theatre, exhibition room and, in the basement, the University’s chemistry and anatomy laboratory.

Arguably the most interesting work took place in the basement, hidden from view, where the Tomlins Reader in Anatomy and his students would dissect people (!). By royal decree of Charles I in 1636, the body of anyone hanged within 21 miles of Oxford belonged to the University. Later medical students had to watch two dissections before qualifying. In today’s basement, you can still see some human bones and a skull (which someone should probably have buried).

You can also visit the largest collection of astrolabes in the world. What is an astrolabe? It is an instrument which helps in navigation and astronomy, in estimating the position of the sun and the stars. Many of our astrolabes come from the Islamic world and helped to ascertain prayer times and the direction of Mecca. Recently, the Museum of the History of Science collaborated with Syrian refugees in Oxford to put together an exhibition. Read their blog and see some astrolabes here: click here

Take the virtual tour Click here and don’t miss: The Penicillin exhibit in the basement. Penicillin was developed in Oxford in the 1940s by Professor Florey and his team. Here you can see not only the original bedpans and biscuit tins used to grow the mould (yes, they were short of research funding!), but even Professor Florey’s Nobel Prize medal.

For fans of Alice in Wonderland, see if you can find Lewis Carroll’s camera. Charles Dodgson (alias Lewis Carroll) was an accomplished photographer and even took some photos of the real Alice Liddell.

When you come to Oxford, we recommend a trip to the museum either before or after a Walking Tours of Oxford tour. If you are particularly interested in Science and Medicine, we can even offer you a specialist Oxford Science and Medicine tour.
Private Tours