One of the most classically-inspired buildings in Oxford is Sir Christopher Wren’s Sheldonian Theatre. It was built as a ceremonial and assembly hall for the University of Oxford. Previously, the University Church had been used for large University gatherings and ceremonies. Archbishop Sheldon, former student of Trinity College and Chancellor of the University from 1667 to 1669, decided that the University had outgrown the church and pledged some of his own money for a new building. He ended up paying for the entire project, around 12x what he had anticipated. On this basis, it seemed reasonable for it to be named after him.

Sheldon approached Christopher Wren, who was the Savilian Professor of Astronomy and was just at the beginning of his architectural career. Wren’s only big project to date had been the chapel of Pembroke College, Cambridge. So, he looked around for inspiration and found the Theatre of Marcellus in Rome. As you can see, he didn’t copy it exactly. His main addition, of course, was a roof. Given the notoriously unpredictable and frequently rainy British weather, he decided that building it without one was not an option. 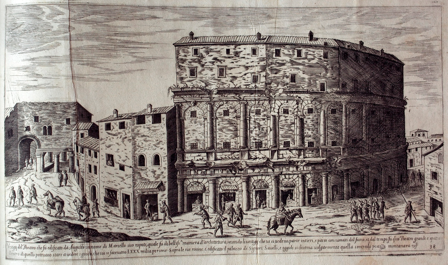 This (below) was how the Sheldonian originally looked. As you can see, the roof was surrounded by oval windows. This was partly because it was to house the Oxford University Press, but the windows proved impractical and leaky and were removed in the 19th century. The cupola was also later re-designed by Edward Blore. However, the original roof was an impressive structure, all the more so because it spanned 70 foot without using any columns at all.

This (below) is what the Sheldonian Theatre looks like today. It serves for large University gatherings: matriculation and graduation ceremonies and meetings of Congregation, the sovereign body of the University consisting of about 5,500 members – unfortunately, they can’t all come at once, since the Sheldonian today has a capacity of 750 people. This also means that the University of Oxford doesn’t just have one ‘Graduation Day’ but has around 20 per year. 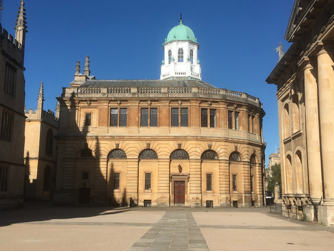 Inside, the theatre is as impressive as it is outside, in particular because of its extraordinary ceiling. This consists of 32 panels, painted by Robert Streater, who was the court painter to Charles II. Take a look at it. It may not be immediately obvious, but you are looking at a cloud on the background of a blue sky with a red cloth rolled back around it. Criss-crossing the ceiling are golden ropes. In Roman theatres, the lack of a roof was compensated by such a cloth, which was pulled across the open roof in inclement weather. Christopher Wren was clearly at pains to pretend that there wasn’t really a roof to his building. However, the advantage of the painted ceiling was that the sky could be populated with all the representatives of the arts and sciences seated around a cherub representing truth. The ceiling was teaching a lesson about the supremacy of truth over the University disciplines and, unfortunately not visible here, it also shows ignorance being expelled. Ignorance is a man with snake for hair, who appears below the bottom of this picture. If you want to see him, come to Oxford and let us show you the Sheldonian Theatre. The ceiling was also apparently an allegory celebrating the Restoration of the British Monarchy under Charles II after the years under Oliver Cromwell’s Puritans. 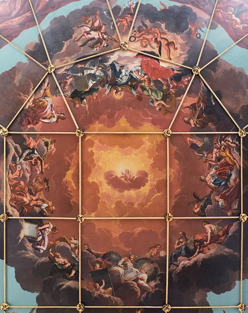 Have a look at the following picture to see the interior of the Sheldonian during a Matriculation Ceremony. Matriculation is when new students are officially added to the ‘Matricula’ or University membership roll and become full members of the University. The students have to wear the University of Oxford’s uniform, the ‘Sub Fusc’ – white shirt, black trousers/skirt, black gown and mortar board hat. You can see them all here.

Here you can see a photo from a Graduation Ceremony. The Pro-Vice Chancellor presiding is wearing an MA gown, whilst the graduate bowing to her is just being awarded his DPhil, which is the Oxford equivalent of a PhD. 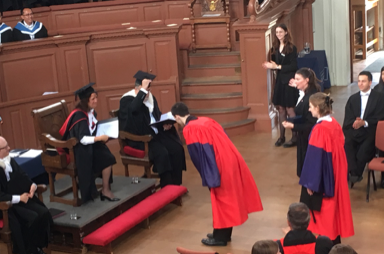 At Walking Tours of Oxford, we would be delighted to take you to the Sheldonian Theatre and point out some of the fascinating features of the building. You can even climb up to the Cupola for a fabulous view of central Oxford.

‘I want to see Oxford University…. and I only have one day in my schedule. What should I do?’
At Walking Tours of Oxford, we are used to answering this question.

We have lots of ideas, but one of our favourites is to combine our own ‘Simply Oxford Tour’ with a visit to Oxford’s most magnificent college – Christ Church – or one of our fine museums (see previous blogs).

Getting here
Perhaps you are staying in London? If so, you can have a leisurely breakfast and still make it to Oxford in time for our Simply Oxford Tour at 11.30 a.m. Take the train from either Paddington or Marylebone Station and arrive for 11am.
We meet at Christ Church, which is to the south of the city, so from the Train Station, head for Carfax Tower in the very centre of Oxford. Then walk down the hill on St Aldate’s street, staying on the left hand side of the road. First, you will see a very imposing 17th century tower. This is ‘Tom Tower’ and it is the everyday entrance to the college for students and academics. Continue down the road to a large set of gates with a shield above it which leads into the beautiful War Memorial garden. This is where your Walking Tours of Oxford guide will meet you.

The Simply Oxford Tour
Click here for further information
This is led by our Institute of Tourist Guiding qualified guides, which makes all the difference!
We will give you the perfect introduction to the City and the University of Oxford and answer all your questions. Where is the University? (Answer: everywhere (!) but we will explain….) What is the relationship between the colleges and the University? (complicated, but interesting…) How do you apply? How do you get a place? What can you study? What is student life like? Can you tell us about Oxford’s history and traditions? Where did they film Inspector Morse/Lewis/Endeavour/Harry Potter?….
We will also show you the iconic buildings which make our city such a special place. Come with us to see the Bodleian Library, the Radcliffe Camera, the Sheldonian Theatre and a few of our 38 colleges.
Our tour will also equip you to make the most of your visit to Christ Church or the museums in your free afternoon.

Lunch
We recommend lunch in a local pub after your Simply Oxford Tour. There are lots of traditional pubs in Oxford, but The Turf Tavern, down a secret passage under our beautiful Bridge of Sighs, is one of the oldest. It has lots of outdoor seating and serves traditional fare and good beer! If you are an Inspector Morse fan, you might like to try the White Horse on Broad Street, where Morse and Lewis liked to down a pint. For a student vibe, try the nearby Kings Arms. Or for something more sedate and academic, with the possibility of a free exhibition thrown in, head for the Weston Library café.

Why visit Christ Church?
Because… 1) it is huge, beautiful and old (founded 16th century by Cardinal Wolsey and re-founded by Henry VIII). 2) it has its own Cathedral. 3) It is where Alice in Wonderland was written. 4) It is a film location and you might recognise some Harry Potter scenes.
(To avoid queues, we recommend that you book tickets to Christ Church online, though you can only do this from the Thursday before your visit. Go to the college website and choose your time: Christ Church tickets
So, after lunch, head back to Carfax and follow our directions down to Christ Church again. This time, go through the Christ Church War Memorial Garden until you find the new Visitor Centre. It is in the style of a traditionally thatched cottage. Inside you will find a shop and restrooms and this is where you pick up your multimedia guide.
Christ Church multi-media guide is a real gem. It provides clear, concise explanations of the college’s history and architecture and it also has all sorts of extras – footage of the private parts of the college and interviews with students and academics. However, if you are a Harry Potter fan, you may want more information – which is where Walking Tours of Oxford can fill you in beforehand.

Museum Visit
If you are still full of energy, you could squeeze in a visit to one of Oxford’s world-class museums. See previous Walking Tours of Oxford blogs for more about the Ashmolean Museum, the Oxford Museum of Natural History, the Museum of the History of Science and the Pitt Rivers Museum. Enjoy!