4th July may be Independence Day in the US, but here in Oxford we celebrate Alice Day. This year it was a bit ‘virtual’ but usually you can bump into several ‘Alices’ wearing little blue dresses and ‘Alice’ bands and take guided ‘Alice walks’ around the city. At Walking Tours of Oxford we would be delighted to take you on an Alice tour any day of the year!
So, why 4th July? Because this was the day in 1862 when Charles Lutwidge Dodgson (alias Lewis Carroll) set off to spend a day rowing down the Thames. With him were his friend Reverend Duckworth and the three young daughters of the Dean of Christ Church, where Dodgson taught maths.

Charles Dodgson was a man with a vivid imagination and a playful sense of humour and he loved to tell stories. The three little girls were called Lorina, Alice and Edith and he made up stories especially for them. Often, they appeared in the stories themselves. On 4th July 1862 he told the story of Alice, who fell down a rabbit hole into another world. It was all a dream, but he wouldn’t reveal that until the end of the story. Alice asked him to write it down. It took him a couple of years, but he did it and gave her the original manuscript as a present. Today, it is Oxford’s most famous and well-loved book. 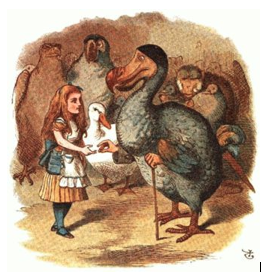 This beautiful illustration is from a book called The Nursery Alice, which was published in 1880, fifteen years after the original Alice in Wonderland. It was for small children and Lewis Carroll shortened and simplified it so they would understand it better. He also asked John Tenniel, the illustrator, to colour in some of his original pictures. Here we see all the members of that 4th July rowing party: The ‘Dodo’ (a joke at himself by Dodgson, who had a bit of a stutter), Alice, the Duck (Reverend Duckworth) and in the back row the Eaglet (Edith) and the Lory (Lorina). All of them have just dried off by running a ‘Caucus Race’ after falling into the pool of Alice’s tears. The Lory had ‘turned sulky’ and would only say ‘I am older than you and must know better.’ Lorina was, of course, Alice and Edith’s older sister.

Lewis Carroll makes frequent (often thinly disguised) references to people and places in Oxford. If you come on one of our tours, we can tell you all about them. Get to know the White Rabbit, the Queen of Hearts, the Dormouse, the Drawling Master and find out why the Hatter was Mad. You can also see some of the places frequented by Dodgson and the real Alice.

At present, we all seem to have fallen down the rabbit hole, but let’s hope it’s all just a bad dream. In the meantime, join our new Bubble Tour!!

Walking Tours of Oxford looks forward to seeing you in Oxford very soon!