Had a certain widow not been found tragically (and some thought suspiciously) drowned in her garden pond, then Oxford’s oldest and largest museum might never have come to be.

The unfortunate victim was the former wife of John Tradescant the Younger. Her recently deceased husband had left his collection of ‘rareities’ to his friend Elias Ashmole, who had helped him to catalogue it in 1656. However, Mrs Tradescant was unimpressed and was in the process of contesting the will, when Ashmole moved in next door to her (!) A hop over the fence, a little push… we shall never know, but the consequence was that Ashmole secured the collection and Oxford, England and the World its first public museum.

You can see portraits of the John Tradescants in the Ashmolean Museum today, the Elder framed by vegetables, fruit and flowers and the Younger proudly wielding a spade. Both were royal gardeners to Charles I, a role which (unusually) involved international travel on a grand scale. Their job was to collect plants, but their hobby was collecting anything they found interesting, the aforementioned ‘rareities’ or ‘curiosities’. 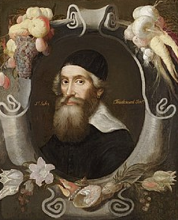 Elias Ashmole was a well-connected lawyer, scholar and antiquarian collector. He eventually gave his and the Tradescants’ collection to the University of Oxford in 1677 on the proviso that it be housed it in a building dedicated to the ‘advancement of knowledge’.

The Ashmolean Museum opened in 1683 but it was considerably smaller than today and was located in the building of what is now Oxford’s Museum of the History of Science on Broad Street. The collections were on the top floor, the ground floor was a lecture theatre and in the basement was the University’s first Chemistry and Anatomy Laboratory. It was here that the University’s first Reader in Anatomy dissected the remains of any criminals hanged within 21 miles of Oxford. (You can see the building here with the famous Oxford heads outside – no, nobody is entirely sure whose heads they are – herms, Roman emperors… the original sculptor left no notes!) 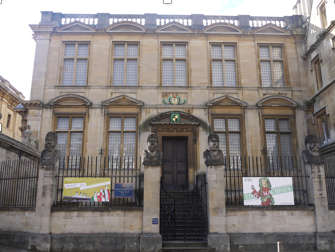 Today’s Ashmolean Museum (see photo) is a short walk from the original museum in a classical building built in the 19th century to the designs of Charles Cockerell and is on a much larger scale. The original collections have been added to over the centuries, there was a redevelopment in 2009 and in 2011 its new Nubian and Egyptian galleries opened. The Ashmolean Museum is primarily dedicated to Art and Archaeology. It houses the largest collection of Raphael drawings in the world, it has a stunning Pre-Raphaelite gallery and an extensive collection of everything from casts, ceramics and coins to sculpture and tapestries. It also has important artefacts from Oxford’s history, such as the coins minted here by Charles I during the Civil War. 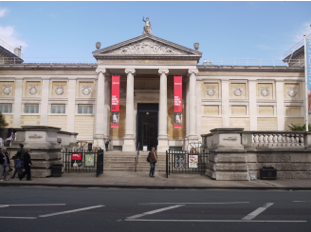 Whilst the museum is currently closed due to the Coronavirus pandemic, it is still visitable online. And don’t think it will be a quick visit! – There are 112,500 objects in the online collection, so that’s around 625 objects every day for the next six months!

Top Tip:
Start with the Treasures Click here.
In particular at this difficult time, look for Walter Sickert’s painting ‘Ennui’ – this may chime with your mood – or remind you how well you are doing… Or look at the Messiah violin by Stradivarius ‘Like the Messiah, worth waiting for’ 😊

Once we are up and running again, a perfect day in Oxford features our Simply Oxford Walking Tour at 11.30am which ends around the Broad Street area, perfect timing for lunch and then afternoon at The Ashmolean Museum.

[For more information about the Tradescants, visit The Garden Museum in Lambeth Click here